A couple weeks ago I ran the MMT 100 in Virginia - a tough but beautiful race. Tomorrow I will be at the starting line of the Sulphur Springs 100. I've never done two 100 milers this close together and hope everything will work out. If the weather forecast is right it will be very hot and humid - perfect Badwater training conditions. Race reports will be online next week.

Good luck to all my friends and fellow runners! Keep your feet on the ground and keep reaching for the stars.

Two days ago I officially started my heat training which is sitting in the sauna as long as I can while drinking a lot of fluids. I lasted 20 minutes - not too bad for the first time. Last year my sauna sitting PB was 1 hour and 15 minutes. Hopefully I can beat that this year.

When I've emailed Ferg Hawke, the famous Canadian Badwater Runner, last year regarding heat training. He recommended doing heat training for about 2 months before Badwater. Anyone who is interested about Ferg Hawke's Badwater experience, I recommend watching the DVD "The Distance of Truth" http://www.thedistanceoftruth.com/ , a great documentary, especially the blister section... Since I don't have a chance to put my treadmill into a sauna, I figured sitting or walking on the spot in a sauna is still better than no heat training at all.

I've also added two more training components to my Badwater training this year. The first is weigth training - 20 minutes about 4 - 5 times a week, especially upper body like abs, arms and core strength. The second one is getting a sun tan. Who in a million years would have thought of that? If I would have to guess which part of my body would suffer the most during the Badwater Ultramarathon last year, there would be no doubts I would say my feet. But you know what - I was completely wrong. The most painful part of my body after the race was the lower part of my face. I got a very bad sun burn which was so painful, I had to take strong pain killers for a few days and couldn't leave the hotel room in Las Vegas until our flight back to Toronto.

I've decided this won't be happening this year and I have to get a good tan before the race. I will be a frequent guest at the tanning studio in my neigbourhood, and I'm also thinking about running with a Buff this year.. http://www.buff.es/

I’ve tried the whole week to figure out what it was that made me run the best 100 mile race ever with a PB of 17.52. Not in my wildest dream I’ve ever thought I could run that time. Here is the course description from Vince’s blog “Monumental Effort” http://www.monumentaleffort.com/ (thanks Vince):

The Jerseyville 100 is a “Fat Ass” event. These runs usually have no entry fee, no prizes and no aid. However, since this run was hosted by Monica Scholz and Phil McColl, the ever-helpful Dieter Scholz had his tent set up and all entrants contributed some vittles to stock the legendary “Scholzy’s Deli” along with a second aid-station (Hawaiian themed, complete with grass skirts, leis and hula hoops at the 5Km turnaround which was captained by Ontario Ultra Series faithful Sharon Zelinski.

The course follows the Hamilton to Brantford Rail Trail 5Km out, and 5Km back.. repeated sixteen times for the 100-milers. The Rail Trail is an abandoned roadbed of the old Toronto, Hamilton and Buffalo Railway (TH&B) which has since been converted into a hiking/biking trail between Hamilton and Brantford. Our 5Km section was in the small town of Jerseyville, Ontario. The cambered, stone-dust covered path between Field Road and Hwy 52 had runners pass by a buffalo ranch, a few cattle farms, a golf course and some marshy ponds.

During the training weeks leading up to the race I set three goals:

I haven’t done any races since Haliburton 100 last September and was physically and mentally prepared. The loop course was a great opportunity to check out what kind of nutrition may work for Badwater. My plan was to use liquids only as long as possible, try mashed potatoes and use bananas if needed. 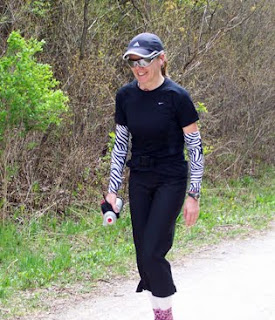 Nineteen hardy souls had signed up for the event and promptly at 6AM on Saturday morning, the official starter (Monica) shouted “GO” and we were off. I felt great from the very beginning and was running at an easy pace, chatting with Vince about his Rim-to-Rim-to-Rim adventure http://www.monumentaleffort.com, talking with Monica about some Badwater logistics, catching up with Steph and meeting Kat, who was running her first 50 miler. As the race continued Steph and I took turns in the lead, encouraging each other. We both set a PB at the 50 mile point. Congratulations Steph! I was running with some of my favourite Swiss tunes and running felt so easy and effortlessly. It was incredible. After 100km, my wonderful husband Jeff joined me for 20km which was a nice change. When he left I only had 40km to go and I promised him that I will be finished in less than 19 hours, as I still felt strong. To my surprise I didn’t slow down much and when I got ready for my last 10km Mark Tamminga who took over at the aid station for Dieter told me I had 1 hour and 6 minutes left to break 18 hours and it wouldn’t be a problem if I could keep the same pace. Wow, that really got me (thank you Mark). I started to look at the numbers and I have to admit that 17 and changes looked a lot better than 18 and changes and I decided to go for it. On the way out the headwind felt stronger than before, my iPod shuffle died and I took a few walking breaks. At the turnaround aid station I had some water and half a banana again, thanked Sharon and John for their excellent support, had a last glance at the disco ball hanging inside the tent and went off for the last 5km. The tailwind felt really good and running in the dark was almost mystical. As I didn’t have any music anymore I was repeating one of my running mantras over and over again: ‘Run Forest Run”. I crossed the finish line minutes before my birthday in a time of 17:52 – a very nice birthday present. 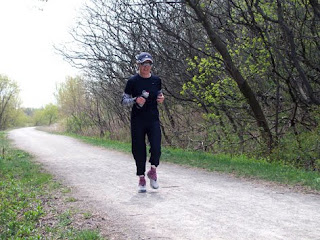 Congratulations to all runners and thanks to everyone who made the Jerseyville 100 event possible. A special thanks to those who helped me to run my best race ever:
Monica, Phil, Dieter, Jennifer-Ann, Sharon, Scott, John Turner, Steph, Adi, Steve, Kinga, Stephan, Vince, Dave, John Rennison (thanks for crewing at the beginning), Mark, Joany, Pierre (thanks for the pictures), Lee Anne, Charlotte, Kat, Wendy, Therese and last but not least my husband Jeff who got me into running and is always supporting me.
I also want to thank Bob from Drymax http://www.drymaxsocks.com/ for providing me with the best socks... no blisters! Finally thanks to Xy Weiss http://www.dirtygirlgaiters.com/ for the most eye-catching gaiters around. 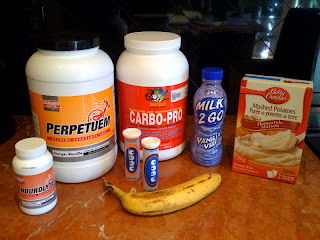 Note: I ended up not using the pop up gazebo because there wasn't enough space. It will come into action at the Sulphur Spring Trail race http://www.burlingtonrunners.com/ 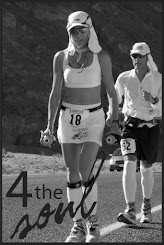